When exploring the history of jazz, we are often reminded of the legendary greats – John Coltrane, Miles Davis, Thelonious Monk, Ella Fitzgerald among so many others. A collective of determined and dynamically gifted musicians that shaped and created a movement through music. A movement deeply rooted in blues and culture, a movement that has  transformed over time and influenced so many musicians generations later. It is very rare that we are able to experience the music live again today that was composed during that cherished time when jazz was even larger than music, but a way of life. There are but a few remaining icons still with us to share their story through music – pianist McCoy Tyner is one of few remaining icons of jazz and on a freezing cold fall night at the Library of Congress, he performed an amazing set of selections in front of a sold-out Coolidge Auditorium (ironically the exact location of Jelly Roll Morton‘s classic jazz recordings that have often been regarded as some of the first recordings of jazz).

” The piano is like an orchestra. I’m very fortunate that I chose it as my instrument.”

McCoy Tyner was born in Philadelphia in 1938. At an early age, his parents encouraged him to explore his musical interests through formal training. It was at the age of 17 that Tyner first met John Coltrane (then a sideman saxophonist with Miles Davis).  Coltrane, widely regarded as one of the most significant saxophonist in music history, had developed a strong bond with Tyner and felt that even as a teenager McCoy was ready to join him in recording and performing globally.  In 1960, they recorded the classic album “My Favorite Things” and soon formed the John Coltrane Quartet – which would remain one of the most seminal groups in jazz history. The quartet included Coltrane and Tyner along with drummer Elvin Jones and bassist Jimmy Garrison. From 1960 through 1965, the quartet went on to achieve international renown with recordings such as “Live at the Village Vanguard”, “Impressions” and Coltrane’s signature piece “A Love Supreme”. McCoy Tyner’s unique piano stylings gave the quartet an extraordinary chemistry, transcending the conventional style of piano playing with sophisticated chords and an explosively percussive left hand creating one of the most identifiable sounds in improvised music. Tyner has formed the vocabulary of a majority of jazz pianists through his harmonic contributions and dramatic rhythmic devices. 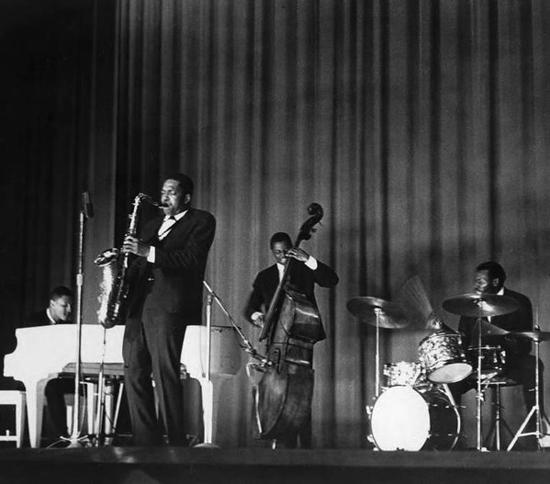 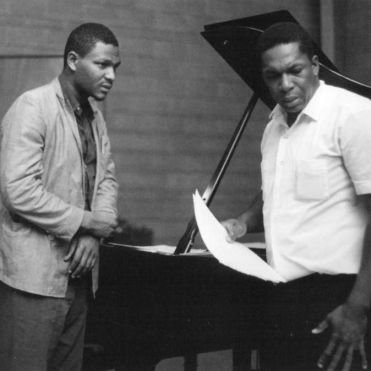 After over five years with the John Coltrane Quartet, Tyner left the group to explore his own destiny as a composer and bandleader. In 1967, his album “The Real McCoy” paired his piano talents with saxophonist Joe Henderson, bassist Ron Carter and drummer Elvin Jones. Later in 1972, he released his Grammy award nominated album “Sahara” – breaking new ground by incorporating sounds and rhythms of Africa into his uniquely textured harmonies on piano. Throughout the 80’s and 90’s, McCoy Tyner arranged and performed countless beautiful jazz recordings with his own big band and jazz trio which included Avery Sharpe on bass and Aaron Scott on drums. In 2005, Tyner became the first client of Blue Note Management after joining forces with the Blue Note Jazz Club in New York and later forming his own record label “McCoy Tyner Music”. To date, McCoy Tyner has released nearly 80 albums under his name, earned four Grammy Awards, and awarded the title Jazz Master from the National Endowment for the Arts. He has played with jazz greats as: Sonny Rollins, Art Blakey, Wayne Shorter, Stanley Turrentine, Billy Cobham, George Benson, and Stanley Clarke just to name a few. He continues to leave his mark on generations of improvisers while remaining a modest and humbled spiritually directed man who has always expanded his vision of the musical landscape and incorporated new elements, whether from distant continents or diverse musical influences. 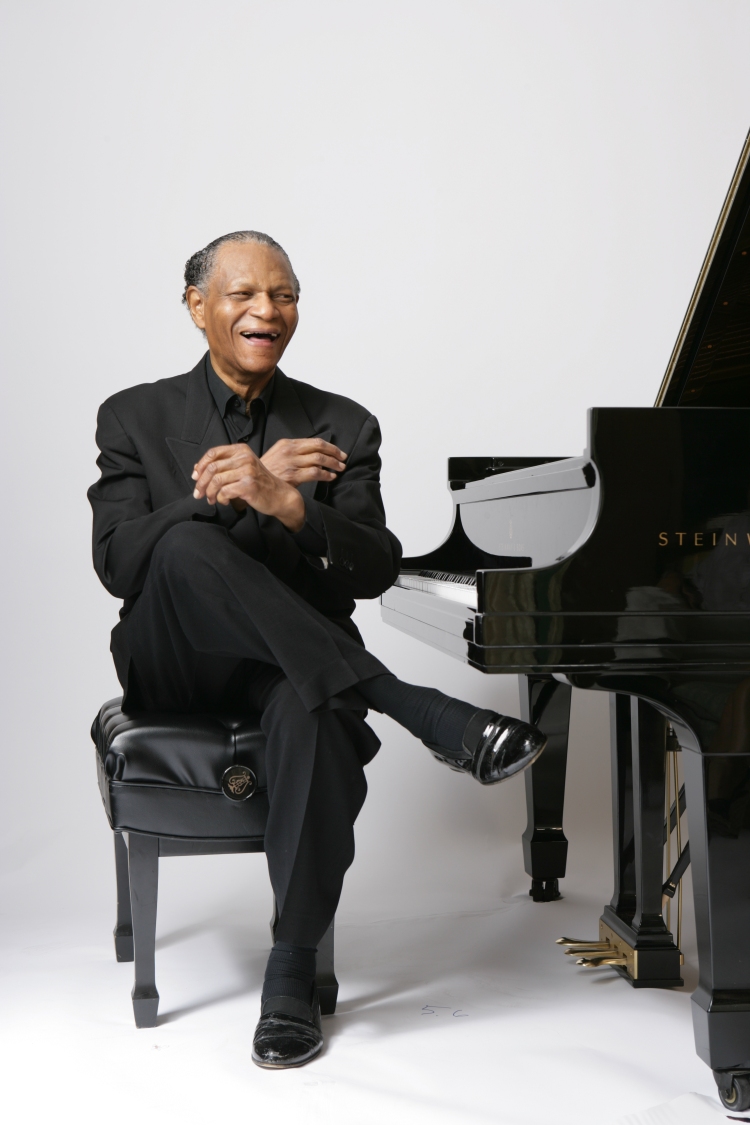 “To me, living and music are all the same thing. And I keep finding out more about music as I learn more about myself, my environment, about all kinds of different things in life. I play what I live. Therefore, just as I can’t predict what kinds of experiences I’m going to have, I can’t predict the directions in which my music will go. I just want to write and play my instrument as I feel.

Along with veteran jazz saxophonist Joe Lovano, drummer Francisco Mela, and bassist Gerald Cannon, the McCoy Tyner Trio gave an awe-inspiring jazz performance for the sold-out audience in attendance at the Library of Congress. Lovano – a distinguished jazz saxophonist in his own right, has recorded with jazz greats as: Peter Erskine, John Scofield, Ornette Coleman and Herbie Hancock among others. He led the trio into a medley of Tyner’s earlier works before introducing him on to the stage where Tyner was welcomed by thunderous applause and multiple standing ovations from the emotionally charged audience of jazz fans both young and old. After welcoming the crowd and humbly thanking those in attendance for coming out to see him, Tyner immediately dove right into his Steinway grand piano and belted out some of his most cherished compositions. The audience watched in amazement as Tyner displayed his signature chops and speed along with that powerful left hand explosiveness that has been his signature style for decades. Drummer Francisco Mela added an array of rhythmic patterns and percussive sounds while demonstrating his inspiring method of drumming. A true drummers’ drummer in all regards, you can clearly see how he is able to dance along with his drumming and add extra accents into the music at any given moment. His drumming kept McCoy Tyner beaming with excitement as he played. Bassist Gerald Cannon provided an excellent solo and gave Tyner’s music that classic and vital authentic jazz sound. In between songs McCoy Tyner spoke in a frail soft tone describing his upbringing in Philadelphia and setting up the scene for his classic “Blues on the Corner”. With every sharp chop that Tyner belted out on piano, drummer Francisco Mela was there to perfectly match him while yelling out “Yeah!” It was truly a magical performance from a jazz legend that is still going at age 80! McCoy Tyner is scheduled to perform a few select dates next year in DC at Blues Alley and in New York at the Blue Note. 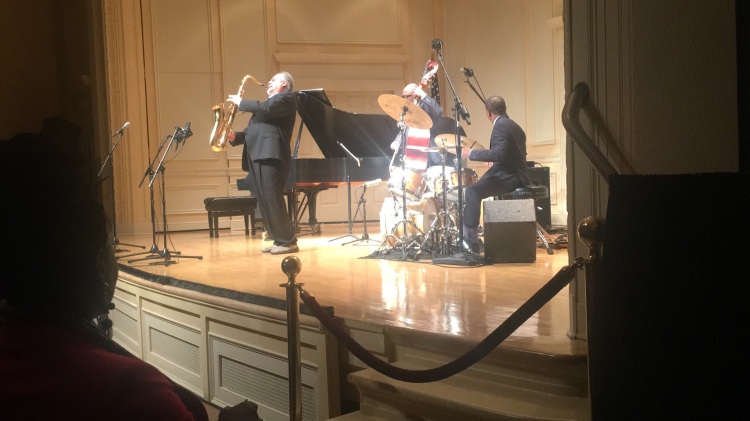 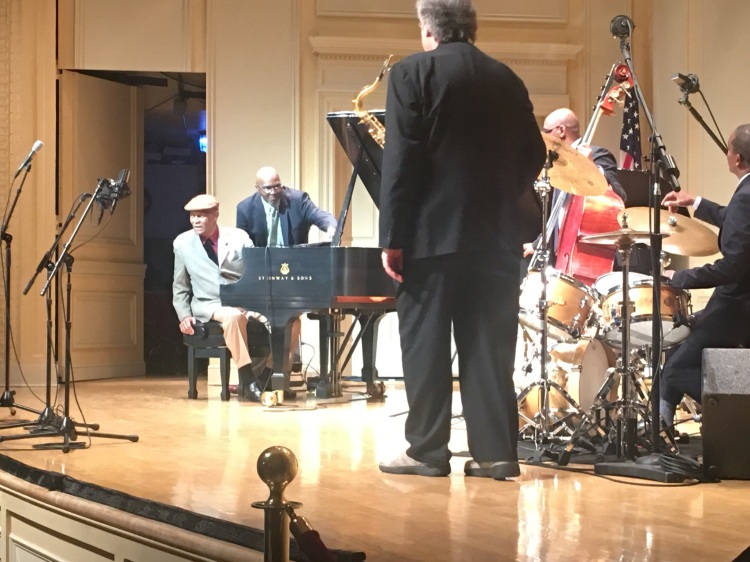 ” I really love the piano and I feel very fortunate that I am able to play and travel all over the world as my career.”

It should also be noted that the Library of Congress deserves a very special thanks for preserving the legacy of those important figures in our past whether it be music, film, art, etc. This program honored a true jazz icon while he is still here to receive his just due and appreciation. It really felt like the spirit of Jelly Roll Morton was there in that same Coolidge Auditorium in which he recorded his first jazz compositions on piano applauding McCoy Tyner from the room. The Library of Congress provided this performance free to the public giving fans that gathered in the historic Coolidge Auditorium on that cold winter night in December an experience to be remembered for a lifetime!

This site uses Akismet to reduce spam. Learn how your comment data is processed.